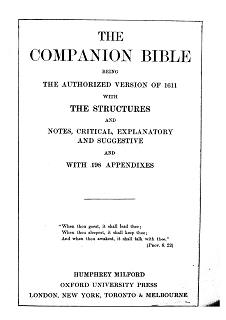 The Companion Bible is a KJV study Bible with extensive notes written by E.W. Bullinger from 1908 until his death in 1913. It has notes on Hebrew and Greek, 198 Appendixes, and lots more. The online Companion Bible can be searched or printed. I find it to be a fascinating study Bible. You can read here: